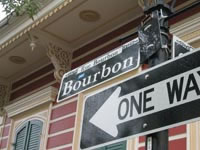 What struck me most about the trip is that New Orleans represents the conflict that each of us as artists must face. It is a picture of the war for our souls that rages in our flesh. Of all the places I’ve been in the last couple years, and the list is extensive, no city compares to New Orleans in the abundance of “gifts”.
Consider:

On the converse side, New Orleans has some of the worst crime in the nation (if not THE worst). Parts of New Orleans are not safe to drive through, let alone stroll through. The degraded culture of the French Quarter has filtered through the city, leaving a stench of violence, alcoholism, addiction, and poverty. The streets of the French Quarter (Bourbon in particular and connecting side streets) assail the senses with a cocktail of offensive odors–urine and vomit, alcohol, trash, etc. Every morning, crews use soap and water to clean the streets and sidewalks. EVERY MORNING. Not once in a while, but every morning. A city so dirty that it needs a bath every morning is not a healthy city.

So how does this apply to us? Aren’t we, as artists in the same battle? We have been given talents and gifts by God in abundance. But the enemy seeks to create in us a craving for the things of the flesh. We seeking after our own fame. We covet the lifestyle that is associated with popularity. We view artistic success as performance and accolades of large crowds. We see the depravity of Hollywood, but still desire the trappings.

Because of this, we seek the easy road to fame. Like Bourbon Street, we pursue the easy route. The easy recording contract, the fast track to our dreams, the “atta boys” and the “way to go’s” of men. But like Bourbon, it is a path to destruction and not to life.

Sometimes (and I mean this to apply to us individually, it is not a commentary on the nature of hurricane Katrina), God will send a hurricane our way to strip us down to the basics again and give us the opportunity to rebuild on the right foundation.

You might be in a hurricane season, you might be recovering from one, or you might be destined for one. How will you respond, or how are you responding? God wants us to reflect the Kingdom of God, which is paved with gold. Are we keeping the streets clean, are we having to wash them every morning, or have we just let them fall into disrepair?